A healthier you is Possible

Sign up today to join my monthly newsletter and start creating your path to better health.

Please enter your name.
Please enter a valid email address.
GET IT
Something went wrong. Please check your entries and try again.
Print 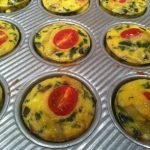 I got my busy on today, preparing food for the week and one of my favorite things to do is make breakfast egg cups.  These are my “go to” for fast, easy, on the go breakfast and the beautiful thing is you can add almost anything you want to these things and they always turn out good.  In this version, I used sausage, zucchini, onion, spinach and tomato but I’ve also used peppers, mushroom, and kale and the results never disappoint.

Fry the sausage in a pan until done.  Drain cooked, crumbled sausage on a plate with a paper towel.  Add 1 T. butter to the pan and melt.  Add onion and zucchini and saute until veggies are crisp tender. Add spinach and tomatoes and sauté until spinach is wilted and tomatoes are softened.

In a non stick cupcake tin, spoon the sausage evenly among 12 cups.  Top the sausage with equal amounts of veggie mixture trying to even it out among the cups.  In a separate bowl, beat the 7 eggs with a whisk until blended.  Carefully pour the egg mixture into each cupcake space, partitioning out the egg mixture evenly among the cups.  Season the tops with sea salt and ground pepper to taste.

Bake at 300 for about 15-20 minutes or until eggs are set.  Let cool slightly and then remove them from the cupcake tin and let cool on a wire rack.  Store in an air tight container in the fridge and enjoy a quick breakfast all week!

I calculated the macronutrients per egg cup by adding together all the nutrition facts of the ingredients.  Depending on the type of sausage, size of zucchini, and number of eggs, the ratios may vary a bit but here is a good guideline.

For those following a paleo, low carb, or keto lifestyle, these would fit in nicely.  They are nutrient dense and high on flavor.  They are also great for a post workout snack.

A healthier you is Possible

Sign up today to join my monthly newsletter and start creating your path to better health.

Please enter your name.
Please enter a valid email address.
GET IT
Something went wrong. Please check your entries and try again.